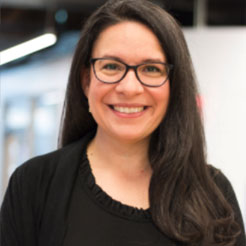 Angela Barranco is an experienced leader with expertise in large-scale public and community engagement.

A conservation biologist by training, Angela led the White House public engagement strategy for President Obama’s top environmental policies and served as Deputy Chief of Staff at the US Department of Housing and Urban Development under Secretary Shaun Donovan. Prior to serving in the Obama Administration, she managed a number of high-profile political campaigns across the country including the 2012 presidential re-election as senior national leadership. Additionally, she was a policy advisor and communications director in the US House of Representatives and legislative director at the municipal level. Prior to joining River LA, Angela worked as a strategic advisor in California for climate and environmental initiatives including clean energy, clean cars, and protecting national monuments.

Angela, who is fluent in Spanish, has a B.A. in Ecology and Environmental Biology from Columbia University.