Homelessness Along the Los Angeles River

At River LA, we strive to explore and develop wholeness in our personal and professional lives. Because of this, we consider the future wholeness of the Los Angeles River by digging into a variety of its issues in the societal, infrastructural, and political realms. This first segment is about homelessness along the LA River. The intro was written by Jason Foster, our Director of Digital and Civic Engagement.

I moved to LA from New York City in 2012 after a couple of years working in affordable housing and advocacy for an organization in Brooklyn. When I arrived, I could not believe the amount of space LA has compared to New York. Instead of affordable housing developers and organizations competing over a limited number of empty parcels, LA presented an opportunity for organizations to work together to build a solution that included everyone. It may not feel like it during rush hour traffic, but the reality is, LA has 8,282 people per square mile compared to NYC’s 25,578 people per square mile. As someone that organized around housing in such a limited city, I was struck by the opportunities for the future of LA’s infrastructure.

Much of my previous work dealt with the same issues LA faces: a growing population, gentrifying neighborhoods, and a skyrocketing homeless population. While solutions to these problems aren’t always clear, the starting point is understanding the depth of the issues.

This post provides an overview of the homelessness issue in LA in the context of the river. Give it a read, and let us know your thoughts, questions, and ideas about the future of the river in the comments.

The growing homeless population in Los Angeles is one of the most fundamental challenges facing our region. And despite its recent attention, it’s not going away anytime soon; The Los Angeles Times recently reported that during 2016 alone, there’s been an alarming 23% increase in the homeless population in LA. Today, this group of people stands at approximately 58,000. That’s 4,000 people shy of the entire city of La Habra, CA.

This last year, Los Angeles County residents and leaders proved their commitment to addressing this crisis. Two measures were passed, HHH and H, aimed to fund essential housing, public facilities, and services. These measures will issue billions of dollars towards homelessness via tax increases and bonds.

With money on the way and a community committed to solving this issue, the homeless population will hopefully soon get the support and care they need. But when we consider the future of one of the biggest publicly owned spaces in California, it’s necessary to explore how these tens of thousands of people interact with the public space and what this means for the future plans of our river.

The evolution of the homelessness crises in Los Angeles and its relationship with the river is rooted in the history of the city. The downtown Los Angeles area, “Skid Row,” is a portion of the city well-known for its dense homeless population, with its transient nature dating back to the late nineteenth century.

In the 1870s, railroads came to LA, and with them, the agricultural industry. Because of the seasonality of agricultural work, the workers in this area were typically short-term, their employment based on the planting and harvesting seasons. The epicenter of this growth was the River-adjacent station on Sixth Street/Whitter Boulevard, which experienced an increase in bars, hotels, and brothels as the area grew.

When the Great Depression hit, an influx of unemployed workers surged into the area, looking for work and housing. This resulted in a neighborhood with a concentrated, and expanding, homeless population.

By the 1980s, the homelessness situation was a crisis. Skid Row was full, and the homeless were living throughout the city, with people and families living under freeways, by the beach, and along the Los Angeles River’s 51 miles. Due to the surge in the population, LA County and City took desperate measures, opening City Hall as a temporary housing site, and signing an emergency agreement for a temporary “urban campground” for hundreds in need. This campground was on 12 acres of land lining the LA River and approximately 2,600 people looked to this camp for housing solutions. Unfortunately, this riverside camp was deemed unsuccessful and closed months later. The two photos above and below are of this campground and were taken by Ken Lubas of the LA Times. 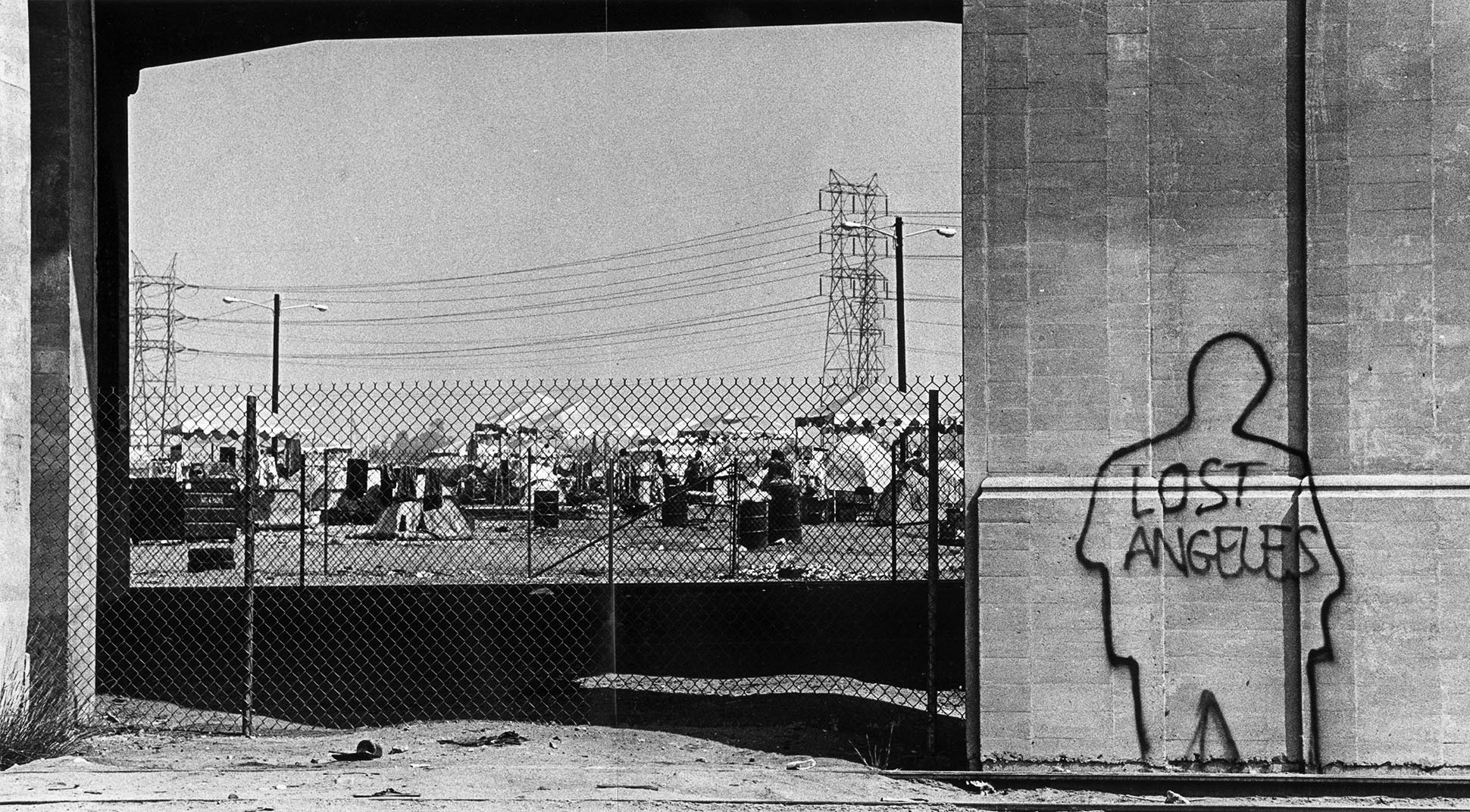 Now, with 22% of America’s homeless population living in the state of California, Los Angeles is home to a significant portion of one of our country’s most vulnerable and neglected communities. Because of this, today’s legislators have collaborated to successfully pass progressive initiatives such as Measure H and HHH to make real, positive changes to help those in need.

Living Along the LA River

The appeal of the LA River as a homeless camp is pretty straightforward: it offers space and shelter. But the dangers for communities and individuals who live riverside are significant. The most obvious threat is flooding: The LA River generally has moderate water running through its channel. This makes it appear like a safe spot to set up camp. But when the rain comes, it can sweep away encampments and the people who live in them, quickly and mercilessly. Every year, the Los Angeles Police Department makes rounds along the river before the rains, raising awareness about the hazards of living along its banks, and suggesting folks in the area move elsewhere.The picture to the right is of the Los Angeles River channel and was taken by Gustavo Ortega. 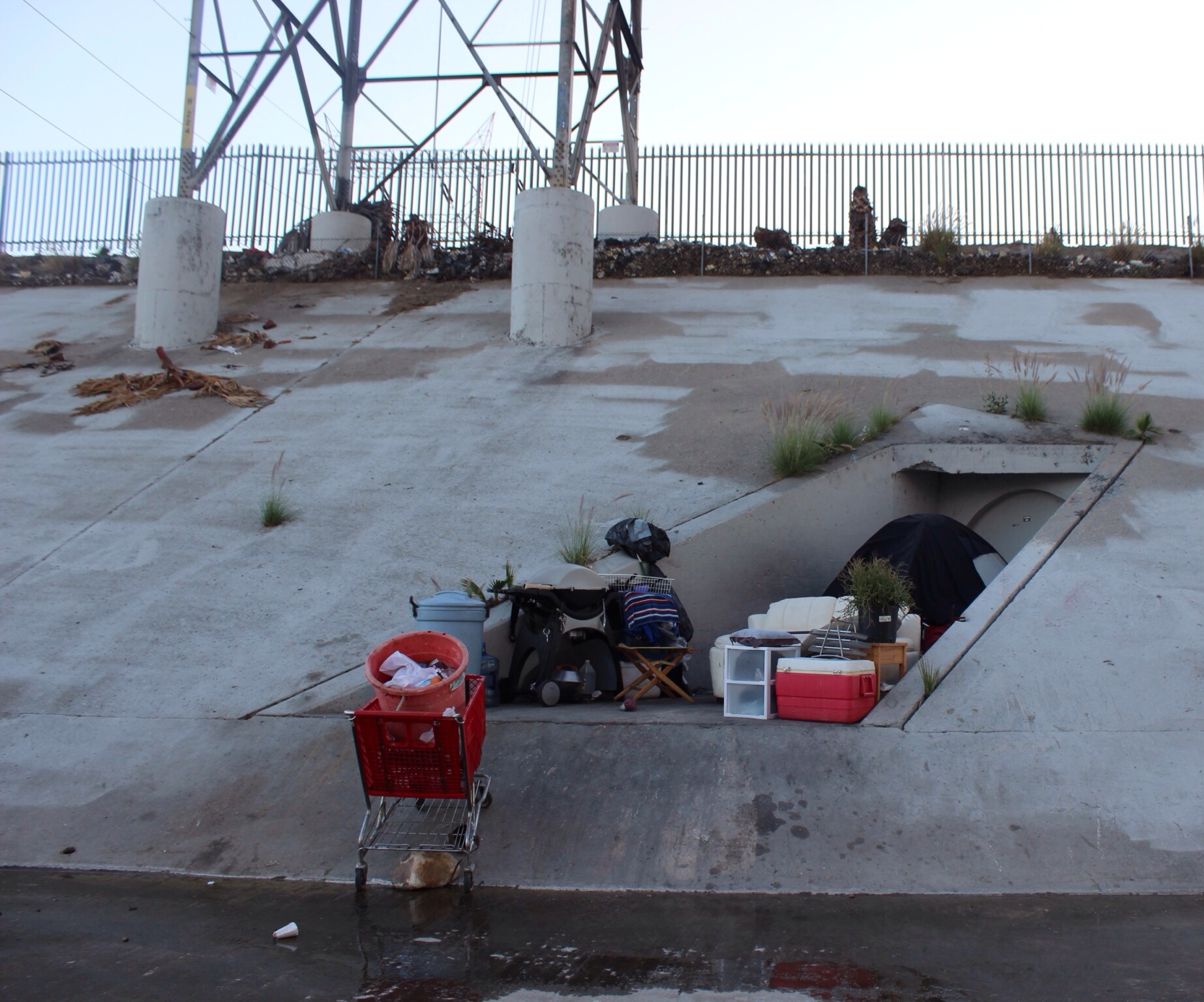 Additionally, the LA River has general safety and health risks. There’s little or no access to basic facilities and resources, including bathrooms or street lamps. In many places, people scale down concrete walls to access the river channel. (We’d like to note this isn’t legal in most places along the river.) Waste in the Los Angeles River is an expensive and significant issue and while authorities and organizations work together to remove it regularly, it’s a constant battle. In 2015, the Los Angeles Times reported that the Bureau of Sanitation removed 18.5 tons of trash from 1,349 homeless encampments, which included human and hazardous waste.

As communities are increasingly taking interest in the river though, they’re taking it upon themselves to clean up and activate the river channel. For example, Friends of the Los Angeles River (FoLAR) held the largest urban river cleanup in America this year. Their efforts attracted 10,000 volunteers who removed over 100 tons of trash from 14 sites along the length of the LA River! The picture to the left is of their event.

Public Space and the Homeless Nationwide

Regardless of a person’s address, or lack thereof, we all want the same thing: security, safety, and individual welfare. This is no different for people struggling with homelessness. When considering public spaces, and infrastructure projects, there are no simple answers to finding the balance of safe space for all and the realities of homelessness. But, as almost all major cities deal with the issue of homelessness, there are design and policy examples we can consider as we move forward.

Many cities, through design and development of their public space, make subtle (and some not-so-subtle) decisions to discourage homeless populations. This could be as simple as designing city benches with armrests between the seats to prohibit visitors from sleeping across them, or, in more drastic form, placing sharp metal spikes in areas outside of buildings where one could sit. Additionally, some cities have created public spaces to discourage loitering, including designing seats to be uncomfortable for extended periods of sitting.

But this isn’t the case everywhere. Some cities have taken innovative, drastic approaches to the issue of homelessness and public space, like Portland, OR. Last year, the city passed their “Safe Sleep Policy,” which allowed an individual or group of up to six camps on a city sidewalk or city right of way overnight from 9 PM to 7 AM. Not intended to be a permanent solution, it aimed to increase safety for those experiencing homelessness while they sought resources and aid. This program ended in August of 2017.

Another interesting example is in our own backyard: Gladys Park in Los Angeles. Displaced community members requested basketball courts and picnic tables are added to the park. Those requests were met, and in a gesture of appreciation and shared community, the park has been kept clean and safe – primarily by the people experiencing homelessness.

The Future of the LA River

As we look to the future of the Los Angeles River, there’s a great deal of uncertainty and a whole lot of excitement. Organizations that, like River LA, are working to move projects and policy forward for the river have a great deal of responsibility and many critical issues to consider. Homelessness is one of these issues that, while not directly related to our daily work, is related to the future of our great city and the public space we all inhabit.

At River LA, our mission is to ensure the 51 mile Los Angeles River integrates design and infrastructure to bring people, water, and nature together. This includes the 58,000 homeless people in our area. Through our work, River LA hopes to bring together our community and improve the lives of all Angelenos.

We don’t have all the answers, all the ideas, or even all the questions. That’s where folks like you, other nonprofit organizations, and our local political leaders come in. The future of the Los Angeles River will take a village to reimagine, recreate, and make happen. So let us know what you think in the comments, and what other issues you’re concerned about when considering the future of the Los Angeles River.

What to learn more about homelessness in LA or get involved with some organizations working to help people experience homelessness? Check out these resources: