River LA and Studio O+A’s Food For Thought Truck joined forces in March to kick off the River City wayfinding program. This project was designed to help orient Angelenos towards the Los Angeles River by giving businesses, organizations, and residents yard signs, window stickers, posters, and in some cases plaques with their distances from the Los Angeles River 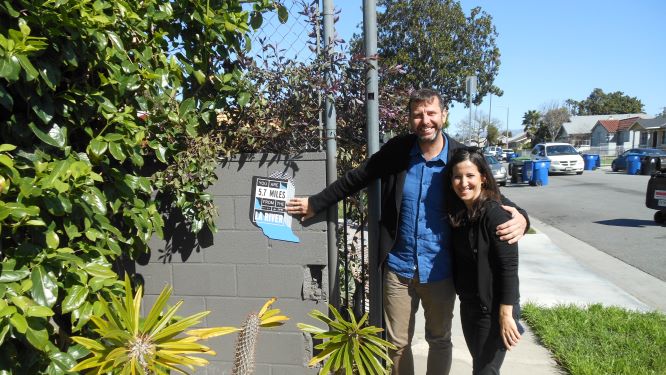 Studio O+A’s team of designers made the trip down from the San Francisco Bay Area in the Food For Thought truck and spent two and a half days in Los Angeles posting signs with River LA staff at parks, schools, and private businesses. The Food For Thought Truck transformed into its mobile-design-studio-mode and was put on display to inspire high school art students.
Studio O+A’s founder, Verda Alexander, was able to engage these students by encouraging them to interact with the truck and explaining the scope of its previous work. River LA hosted a River City culmination event at the La Kretz Innovation Campus on the final day of sign planting. At this event, the members of the public were encouraged to explore the Food For Thought Truck and pick up their own River City sign for their homes and businesses.