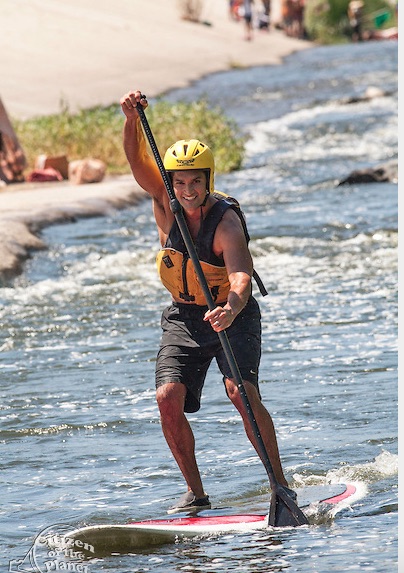 My River Supporter Story (as a pro bono attorney helping out RiverLA):

I lived in Los Angeles for almost a decade before I finally saw the Los Angeles River.  That's technically not true--like any other fan of Terminator 2: Judgment Day and the many other movies shot within its concrete banks, I'd seen its vehicle-heavy cameos dozens of times--but I didn't see the River as an ecologically viable, living and flowing waterway until I actually visited it.

Since that first taste of the River (not literal . . . yet), I've picnicked in its parks, practiced yoga at a brewery a stone's throw from its path, crossed and re-crossed its historic bridges (on the way to some Kanom Krok at LAX-C), run a half-marathon along its banks, admired sparkling classic cars displayed in its bed, and stand-up paddled in its waters as a competitor in a boat race.  It’s always one of my first stops when showing new people around LA, and there’s nothing more satisfying than winning over a River skeptic.

As much fun as I’d had on the River, I didn’t appreciate its true potential and importance (far beyond recreation) until I met Omar of River LA at an L.A. River Night Run put on by Detox Retox Events (now Good Bibes).  We discussed their ongoing Greenway 2020 campaign--to connect all 51 miles of the River together into a single bike and pedestrian network—and their pocket parks under their Rio Vistas initiative.  Ever-charmed and impressed with Omar's grandiose vision for what the River could be for the city, I asked whether I could do anything to help the organization and River revitalization efforts.

In a turn that will surprise no one familiar with the tenacity of the River LA folks, Jason Foster at River LA called my office the next day, pitching the opportunity to help out on a project to create a tool that could help guide the revitalization of the River, viewed as a whole, for years to come.  In the face of that ambitious scope, I had to sign on.

Over the last year and a half, I and my colleagues Katherine Zuber and Tom McHenry at Gibson Dunn & Crutcher have advised RiverLA as their pro bono legal counsel for the project.  We've helped River LA and its prestigious partners (including Gehry Partners, OLIN, and Geosyntec) set up the system of overlapping legal obligations, entitlements, and guarantees necessary to get the many parties involved in this project working and contributing.  Through this work, I personally have had the opportunity to hear about the many possible paths that the River's revitalization can take, and see the dedication and foresight that everyone brings to the project every day.  The second phase is underway, and I'm proud to be a part of efforts that will help to ensure the transformation and revitalization of the River follows an integrated, sustainable, and conscious vision of the River's future.

I am a River supporter because it is simultaneously LA's past and its evolving future.  The River was once a scaffold for LA and its development before LA grew explosively into its immense, unplanned sprawl, and it still remains one of the best opportunities for unifying the 51 miles, 17 cities, and innumerable neighborhoods through which it passes.  It offers a ready-made and crucial symbol for a single LA identity made up of the myriad histories, backgrounds, and cultures of those who live here.  All told, although you might not realize it when looking at the River's summer flow rate (as opposed to its flood-prone winter current), the River's centrality and importance to Los Angeles and its future cannot be overstated.

RiverLA's activities are, more than anything, an opportunity to seize the River's potential and to positively change the face of LA. That is why I support RiverLA.