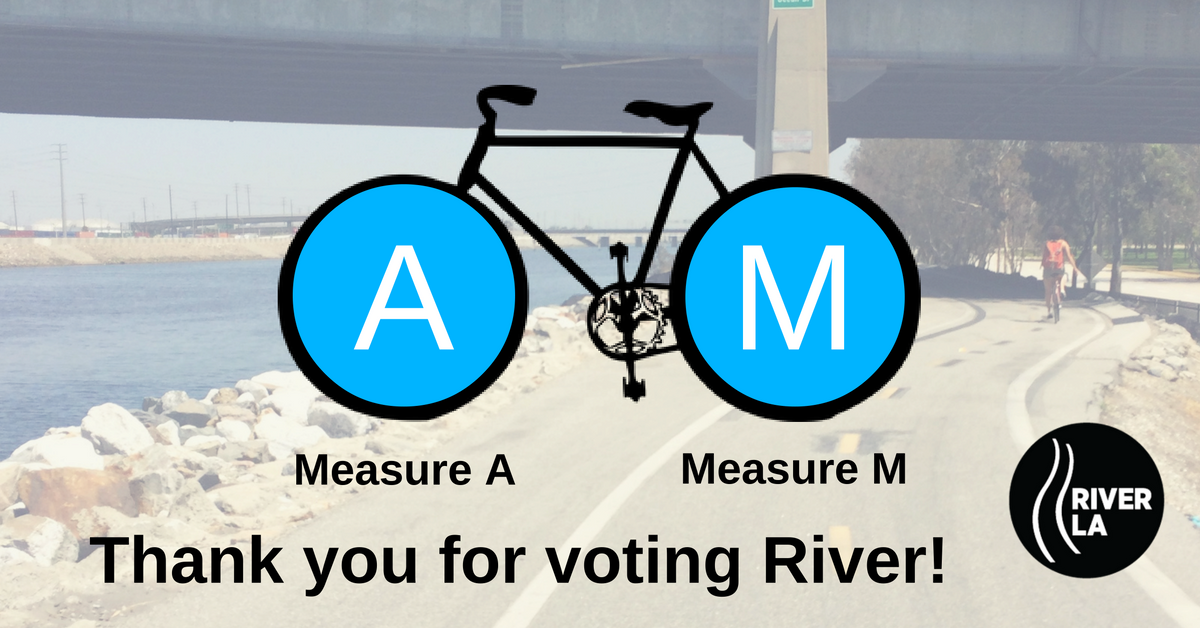 There has long been a vision to connect all 51 miles of the Los Angeles River. Three years ago, River LA decided to take on that challenge and launched the Greenway 2020 campaign, a movement to connect the entire Los Angeles River, from Canoga Park to Long Beach, by the year 2020. We weren’t sure how we would accomplish this, but we knew it was a worthy goal that was shared by many.

Now, after Election Day, our “blue sky” strategy is one giant step closer to becoming a reality. Measure M, the Los Angeles County Traffic Improvement Plan, was passed with nearly 70% of LA County voters. The measure will direct approximately $425 million towards creating an active transportation corridor along the LA River, which will jumpstart Greenway 2020 and our efforts to connect our neighborhoods, ease our commutes, and help communities engage with their river.

River LA was deeply invested in Measure M’s success, leading a major voter education campaign that reached approximately 300,000 voters in Los Angeles and received over 2 million social media impressions. Since the beginning we have been fortunate to have Mayor Eric Garcetti as a fierce supporter. The Mayor adopted the Greenway 2020 plan in his first hundred days in office, and was a huge champion for Measure M appearing across the County on public transportation and in commercials raising public awareness of our region’s transportation needs.

Additionally, LA County Supervisors Sheila Kuehl and Hilda Solis advocated aggressively on Measure M’s behalf, also touting the significance of Measure A, an open space and parks measure, which also passed this year. This collaborative commitment to the importance of public investment in open space brought our County together. Once again River LA invested deeply in Measure A’s success by leading a campaign that reached over 300,000 voters in Los Angeles and generated another 2 million impressions on line.

We are incredibly encouraged to participate in the growing movement that is dedicated to creating a better region and Los Angeles River and we look forward to creating more investment in public infrastructure via programs like Greenway 2020, Measure M and Measure A, which are essential to building a great public resource for everyone.